NORTHERN France’s wind and cobbles called for a select troupe of five St. Tiernan’s soldiers. Two weakly signed up for 30km of the infamous pavé, but a trio took aim for it all; 160km of riding, 50km of pavé, untold levels of suffering.

THREE forty five in the morning; not even the chicken is up yet thinking about laying breakfast and I’m putting on my gear to get on the road from Lille to Roubaix.

Getting out of my hotel room and on the road is a blur, but I am glad we found a direct way to Roubaix after the previous day’s adventure through the back streets of Lille (click for evidence) – five Garmins between us and no sense of direction!

At least the morning was dry, until we go to Busigny, then it was wet, then it was coupled with additional anxiety about the thought of wet cobbles.

Just outside of Troisville our first puncture came, Dermot Doherty taking the hit and due to rung threads on the holding nut, it proved too difficult for us to take off by hand, so we had to call the service vehicle.

We got back on the road hoping that was not how the day would progress, but we had fallen back a good way and so now had the first sector of pavé almost to ourselves.

Approaching it I recalled a sentence in Sean Kelly’s book in which he was told that he did not go fast enough over the pavé on his first attempt, and so was scooped up by the broom wagon – I decided to commit to this first run.

The initial reaction was shock, but the constant vibration and juddering was something you cannot prepare for unless you have been on one of the sectors in Roubaix – any roads in Ireland that are potholed or cobbled sections in towns cannot come close to the gross effect these pavé have when you hit them first.

In future sectors varying stone size, angle, profile, depth, and topology just brought home that once you are on the cobbles there is nothing for it except to look far ahead and keep the pedals going and the bike upright and hold on until the end of the sector.

This first section was wet, had a left turn, and went downhill after the turn and then went back uphill in a slight drag towards the end. 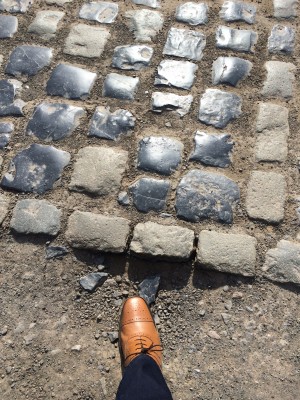 Coming off that first section I turned around and neither Dermot nor Cormac were in sight. I waited a minute, no appearance. I rolled back down the road and waited. A few minutes later the guys came into view.

As it turned out, at the left turn, Cormac’s steering had wanted to go straight on! Luckily the service van we had previously used was not far behind and so with steering straightened and tightened we were able to move on.

We traversed the next section with no incident, and I recall on the third or fourth we had our first spill; I just heard Cormac’s expletive and the sound of him and the bike hitting the ground.

I noticed our confidence rising the more sectors we did, the rain had stopped, and the ground was drying and we were moving from left to right more regularly.

On that point, the tricky thing about this sportive is that you inevitably come across people who are moving slower than you. This may not seem like much but the roads have a profile with a crown in the middle that then drops off left and right.

In addition, the condition of the roads at the edges was worse than on the crown so by taking the chance to go left or right you risk a fall, riding on a much worse surface, or both.

I personally found that the sections in which I had a clear run at with nobody in front I could go over easier, because I could be more committed and go at my own speed.

On some occasions I was the slower guy and people came around me, sometimes swarms of mountain bikes (grrrr!), but as they were going faster I still had clear road ahead.

The downside was that on the roads we were much quicker than the mountain bikes so tended to catch them, not get any draft, and then they would pass us again on the cobbles!

When the pros do this, they are chasing each other’s wheels so there effectively is nobody going slower than them ahead so that consistency of pace is critical, in my opinion, to really getting a rhythm on the pavé.

‘There are two other five star secteurs within the 27; these were barely noticeable in comparison to Arenberg’

The trouée d’Arenberg – this is an experience in itself within this sportive. It is talked about mythically and that adds to the anticipation of its arrival. It had rained earlier so there was additional anxiety to overcome. 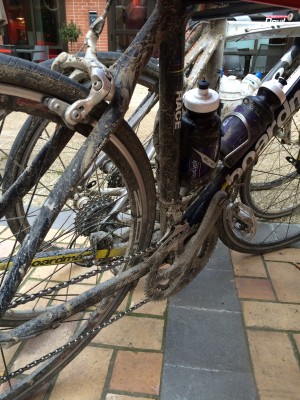 As you come out of the village just before the Arenberg, the trees in the distance draw your attention and as you get closer the gap starts to open up like the jaws of a huge beast (this was obviously a result of the anxiety I felt!) and before you know it you are over the train tracks and onto the trench.

Dropping a little for the first 50 metres or so, you realise, looking at the cobbles, that these are indeed bigger, blacker, more broken, more separated, and glisten menacingly with the recent water deposited from the rainfall.

When we came to this section there was an added complication, a rider had fallen and was being seen to on the left hand side of the track and, in front and behind him, were two ambulances and so this compressed the space to the right hand side and off the coveted ‘crown’, making for the likelihood of more accidents.

Within the first few tens of metres I witnessed four people coming off to the extent that I decided to take the escape road. As I took the bike to that side another two riders went to ground and so validated my decision to stay in one piece.

I came back onto the cobbles about two-thirds of the way down and passed by several people walking along the side having been off their bikes!

There are two other five star rated sections within the 27, Mons en Pévèle and Carrefour del’Arbre, and these were barely noticeable in comparison to the complexity of the Arenberg.

‘There is no way to train for this, unless you can train on the pavé directly’

The experience of the pavé brings home, in a crystal clear way, that any weakness in you or your bike, any historic, dormant injury you may have will be identified, exposed, and exploited by the constant pounding of the pavé.

Of course, one could choose to go against the spirit of the whole thing and do it on a mountain bike, which many did.

The final run in is somewhat of an anti-climax to the epic experience, the road to the velodrome is interrupted with several traffic lights, and we didn’t get to go over the final middle-of-the-road secteur of cobbles, in which the named stones of the victors are placed. But the velodrome itself is a great finish to the day.

Doing it as a group was great fun and helped with the morale quite a bit, and also gave us confidence that there was someone around in the case of a mechanical, or worse, an injury.

The chat about the sportive before and after, watching the pro-race, getting lost on the way to Roubaix – it was a wonderful weekend and I enjoyed it immensely.

Would I do it again? On Saturday evening I was a, ‘no way’, watching the pros on Sunday the curiousity about what you would do differently crept in, the discussions we had about the ways to go about or tackle them again, and sitting here now thinking back about it – I might!

The most surprising thing to me, and a testament to equipment quality these days, we had only one puncture and one mechanical that could be nursed around the course.

'Mud-caked cogs caused shifters to be manipulated with fists'