‘Mud-caked cogs caused shifters to be manipulated with fists’

Two years ago Ronde van Vlaanderen was run off in near freezing conditions, this year was nearly as poor for the first four hours, followed by overcast skies and cold for the following four. It was not until the feed before the Koppenberg that the sun came out. Is it any wonder we keep on being tempted back?

It is a familiar routine now; set up in Bruges on the Friday, take on the sportive from first light on Saturday, watch the pros on the Sunday and home on Monday, many toffee waffles and beer and bratwurst later

The course is a real grueller with a bland series of flat roads through various towns, villages and canal paths of West Flanders. This serves to soften you up for what is to follow.

You need to keep out of the wind, sit in on the wheel, avoid the road furniture and try to stay out of the grooves down the centre and sides of the concrete slab roads. You need to eat and drink continuously and concentrate all day long.

Feed stations overflowed with bready and caramel waffles, oranges, bananas, and energy drinks. Sadly, we were outdoors all day, including the stops, and this kept them short.

Everyone was looking in bad shape by the second stop at 100km, which was comforting in some respects. We were ticking off the kilometres but not getting through many of the main obstacles.

The five of us had stayed together pretty closely until we got to the climbs but after that it becomes every man for himself.

The Tiegemberg is not too testing, had you not been battered by the conditions. Fingers were of little use and mud caked mechs and cogs caused shifters to be manipulated with palms and fists.

After that the stretches of cobbles at Wannegem serve to loosen the teeth before the run into the Molenburg, Wolvenberg, Ruiterstraat, and Paddestraat as we get in to the meat of the day.

The cobbles on the fabled Koppenberg climb were soaked and were impossible to get up due to the crowd. It was just disappointing that we couldn’t step off till two thirds of the way up its 22% slopes.

The hills that followed were gruelling and came every 5 or 6k, producing a six-hour interval session.

The final run of Oud Kwaremont and Paterberg are so well known that you can distract yourself from the bone-jarring ride with thoughts of the greats who have powered over the same stones. The final 15k run in to the finish is exhilarating. We were in around 18:30. with an average speed somewhere around the 23.5kph. 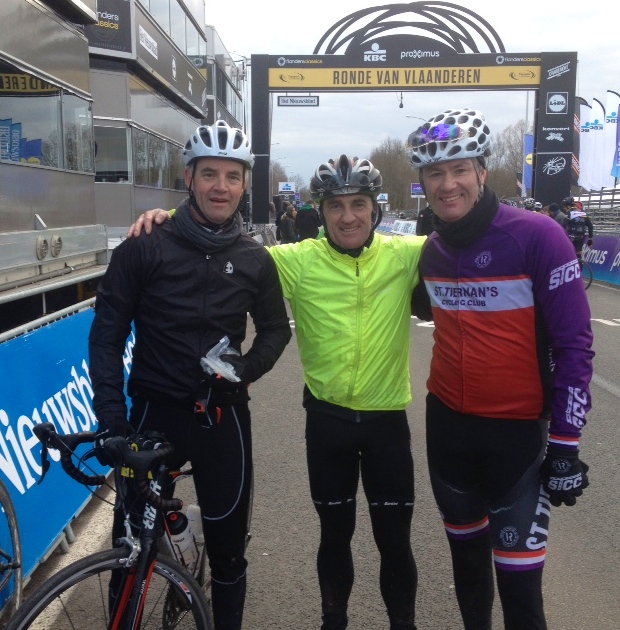 On Sunday, we saw the race off in the main square in Bruges in bright sunshine. Without Tom Boonen and Fabian [Cancellara] lining out, the crowd and ourselves were a little more subdued than usual.

There were rider interviews in front of a crowd of a few thousand and a fair smattering of Europop from 8:30 to 10:30 in the morning.

We got a train to Ronse and on to the Fanzone on the Kwaremont for a day of cycling hedonism.

Matt Brammeier was the only Irish participant and gave a good account of himself. As he came by for the final time we were able to give him a big shout and he shot us a glance. I really think we made a connection. By this time the big boys and Kristoff took over.

No Belgian win, but a satisfaction that a future grand champion had captured the locals’ hallowed race.

But I digress, it’s nearly time to start planning for next year. 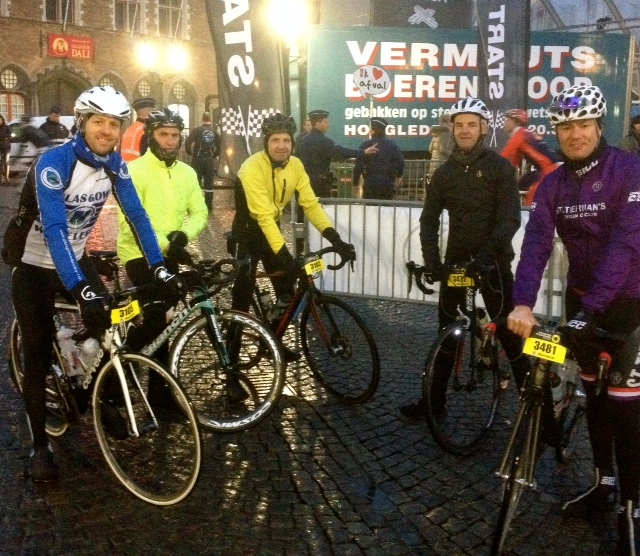 And you thought that was a long report! Check out the five-part epic that was Mayo man Mick Dempsey’s Tour Of Flanders 2013 review:

And here’s 2012. Enjoy! Fancy a go yourself? We plan trips to at least two spring Classics every year.