McGettigan had stormed up to within the top 25 after finishing in the bunch on Saturday’s run to Craanford and knocking out an 8’19” time-trial on Sunday morning.

Holding strong in the bunch again on Sunday meant he kept his position and he – along with team mates Barry Walsh and James Quinn – was getting ready for the sprint to the Quarry outside Blessington when a pile up hit. 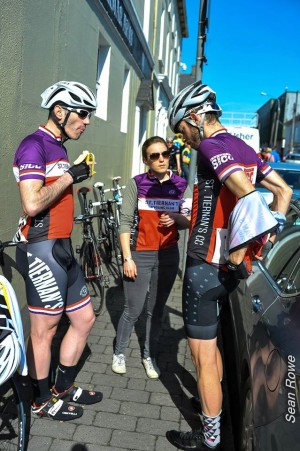 Quinn and McGettigan came down in it and Quinn was able to remount, but the damage to McGettigan’s bike was too severe [thanks to Lucan CC for taking it to the finish].

Speaking that night, he said: “I am grand. Just a bit sore. Bike is finished though! Just saw the results and it looks like I made the cut; 108th. Doubt I will do Gorey again. Crazy amount of crashes, just nice to get around it.”

Quinn was more subdued, saying: “After a total of around 320km racing, to crash 2km from the finish? Not ideal.”

Walsh summed up the weekend like so: “Gesticulating Frenchmen, coffee drinking Germans, Jimmy Staggs ‘custom wheels’, The Camel, Pacman, #73, Hacketstown, Sunburn, ‘wheres the bnb?’, ‘wheres me legs?’, overnight porridge and, ultimately, an unfortunate ending, but sure wouldn’t we all do it again next week if we had the chance! This bike racing is some crazy game all the same!”

Directeur Sportif Jessica Lamb, making her first appearance in the role, was impressed with the team’s performance, albeit disappointed by the unfair ending.

“The lads rode solidly all weekend in a very tough race,” she said. “The ending was not a true reflection of their rides.

“They did receive some consolation from injured Fergal May, who greeted them with Cokes at the Quarry and gave the sermon for John’s Canyon back in Blessington. Cheers FM.”

She added: “Big shout out to too Gloria and Allen Proby, our brilliant hosts at Riverfield Farmhouse. We were fed day and night and waited on like house guests – and for peanuts.” Chapeau.

The next big stage race for the jersey will be Ras Dhun na nGall in June. Stay tuned. 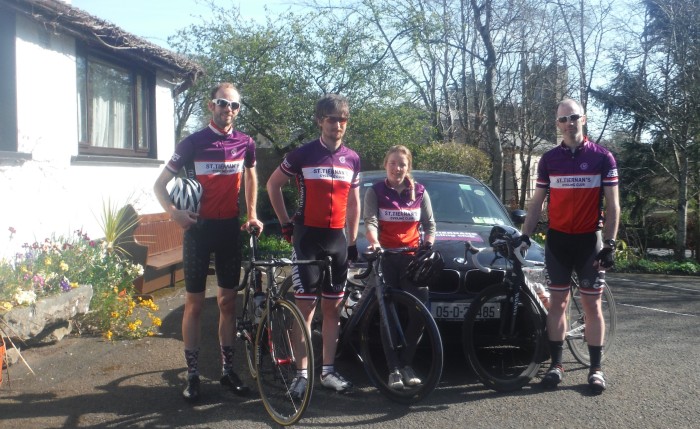 'Mud-caked cogs caused shifters to be manipulated with fists'