Intimidating isn’t the word, frightening, awesome, inspiring. Crammed into a minibus we looked on, as two hours into our journey south, the Pyrenees loomed large. Six months after signing on for the Etape Act II we are finally here. The long hard days of training are coming to conclude with the daunting goal of stage 16 of the tour de France ahead. Seasoned commentators are calling this stage the circle of death, four renowned climbs, that have been travelled by some of the greats of the sport. Hinault, Fignon, Roche, Indurain, the list of greats who have battled and won on these climbs. On Satuurday next we will take the same route as the tour will for Stage 16. 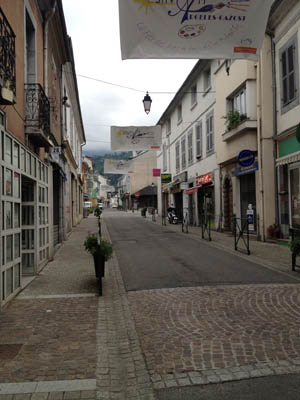 On the bus the atmosphere dulled ever so slightly as the horizon showed itself. Bren cracked a few jokes, Dave took it in his stride, Rob laughed and Kevin, the font of all knowledge, rested easy in the knowledge that he has been here before.

Today has been a long day. Starting at ten in Dublin airport, passing through Toulouse, Lourdes and on to Argeles Gazost for nine pm Irish time. After some duck ” a la ” pasta for dinner we built up the bikes, that had arrived here safely on Saturday. All appears to be good, with only Brendan Bonnie’s earth shattering exploding rear tyre giving the locals something to complain about. I’m rooming with the wise owl that is Kevin Mc Namee and yet again he has astounded me as porridge, cereal bars and home made fruit cake all made there way out of his luggage. He also brought some washing powder so at least the gear will be clean.

Tomorrow we start on the Aubisque. My memories of this climb date back to Stephen Roche, resplendent in his green, blue and white La Redoute jersey cresting the summit with his arms skyward in salute to his first stage win. I will be thinking of this as we start and probably wishing I was home as we finish.