Our crew of club hard men and l’Étape veteran Kevin McNamee are making their way to France today to prepare for the epic l’Étape du Tour Act II. They are going post here daily on their cycling adventures the Pyrenees throughout the week.

A tough challenge faces them next Saturday as they start in Pau then the course takes on Col d’Aubisque and Col du Soulor in the first 70kms which are both over 1,500m.

That seems to just the warm up for the highlight: Col du Tourmalet. A Hors Category climb, at 2,115m it is the highest road in the Pyrenees and has featured in the Tour de Frace more than any other pass. The climb is from the Luz St Sauveur side. 19km at an average gradient of 7.9% with a max gradient of 10.2% it takes around 2 hours to climb and has a difficulty rating of 4/5 on ClimbMyBike.com. 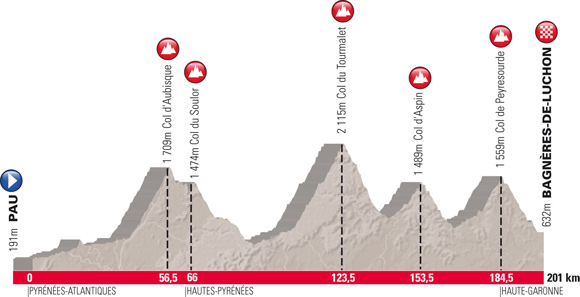 After the Tourmalet, our riders face another two big climbs. The first being Col d’Aspin, another Cat. 1 which has appeared 66 times in the Tour de France. This pass is the middle link of the Col du Tourmalet and the last climb of the day Col de Peyresourde. A 15km climb with an average gradient of 6.1% which featured in the 2007 l’Etape.

This truly a classic set of climbs that have seen a lot of drama since the first Tour de France in 1910. The origin of the Tourmalet as part of the Tour is fascinating and detailed in a book by Alphonse Steinès who surveyed the climb for inclusion in the 2012 Tour de France.

“Steinès first agreed that the Tour would pay 2,000 francs to clear the Col d’Aubisque, then came back to investigate the Tourmalet. He started at Sainte-Marie-de-Campan with sausage, ham and cheese at the inn opposite the church and arranged to hire a driver called Dupont from Bagnères-de-Bigorre. Dupont and Steinès made it the first 16 km, after which their car came to a stop. Dupont and Steinès started to walk but Dupont turned back after 600m, shouting: “The bears come over from Spain when it snows.” Steinès set off. He mistook voices in the darkness for thieves. They were youngsters guarding sheep with their dog. Steinès called to one.

“Son, do you know the Tourmalet well? Could you guide me? I’ll give you a gold coin. When we get to the other top, I’ll give you another one.”
The boy joined him but then turned back.

Steinès rested on a rock. He considered sitting it out until dawn, then realised he’d freeze. He slipped on the icy road, then fell into a stream. He climbed back to the road and again fell in the snow. Exhausted and stumbling, he heard another voice.
“Tell me who goes there or I’ll shoot.”

“I’m a lost traveller. I’ve just come across the Tourmalet.”
“Oh, it’s you, Monsieur Steinès! We were expecting you! We got a phone call at Ste-Marie-de-Campan. Everybody’s at Barèges. It’s coming on for three o’clock. There are search teams of guides out looking for you.”

The organising newspaper, L’Auto, had a correspondent at Barèges, a man called Lanne-Camy. He took him for a bath and provided new clothes.
Steines sent a telegram to Desgrange: “Crossed Tourmalet stop. Very good road stop. Perfectly feasible.””

With internet connections hopefully on their side we look forward to reading their French cycling odyssey throughout the week and wish them the best of luck for one of the toughest Étapes to date.

Continue to Part I