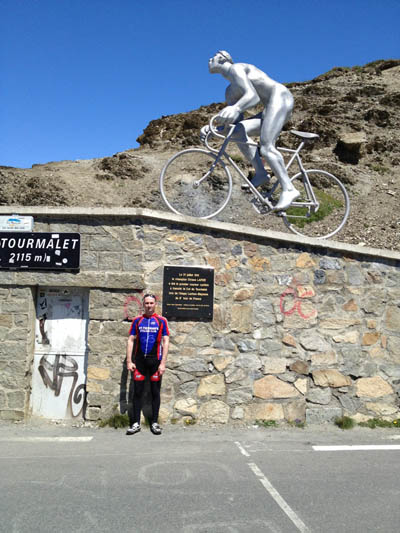 The weather here has been miserable for the last two days. All those romantic notions of ascending to summits that stretch as far as the eye can see, in 30 degrees heat, have been reduced to views of mist and clouds sweeping across your path. This may appear to be of little concern to the reader but the reality of this bites hard when descending from these climbs. The descent from these mountains can take up to 45 minutes. In these conditions you must show some caution. Brakes on most of the time, the muscles in your forearm start to cramp very quickly. Your always alert for sheep, cows, horses and crazy french drivers racing towards you. Worst of all though is the cold. It’s very, very cold.

Today we climbed the Tourmalet, famous for over 100 years of tour history it has feature on countess editions. The ascent is long and arduous, 18.6 kilometres it rises at an average 8%. There is some respite in false flat sections balanced by some horribly steep sections.

It is a climb that has grasped my imagination since I started watching the tour. I now appreciate, even more, the abilities of the riders who race it. Something we have all noticed is how the characteristics of the landscape changes as you ascend. The Tourmalet is a prime example of this. It is densely forrested on the lower slopes with low stone walls, flowing with trees, planting and grasses. This reduces to grassy knolls at about 1000m, the sound of your heavy breathing, crickets and cow bells to accompany your passage. ( You begin to understand the logic of a cowbell in these parts as you can hear the animal ahead, hidden in the mists they are usually standing in the middle of the road playing chicken with your nice carbon bicycle frame) Finally the grass gives way to rock. It’s here the Tourmalet comes into its own, ridges appear overhead as we reach 2115m, signs for rockfalls decorate the roads, boulders edge the route. 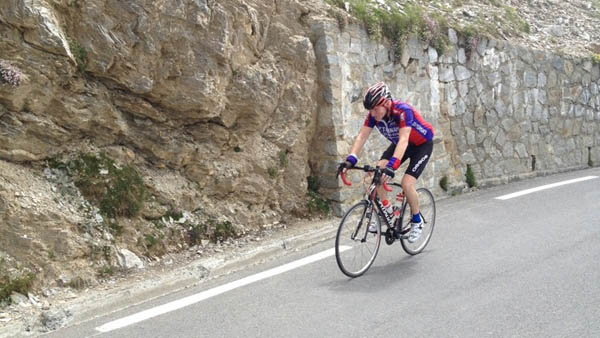 We ascend through the clouds today to be greeted with 30 degrees and sunny sky’s. It felt like we reached they top of the world. Well, when I say we, I mean the Tiernans riders, several hundred other riders, scores of walkers and half of Holland, setting up camp for the coming tour de frange stage. Popular spot this, pity we couldn’t stay.

25 kilometres and 45 minutes later we reached the base of the mountain. To say we couldn’t feel our hands would be an understatement. Your clothes drenched in sweat from the ascent have frozen, your arms numb from pulling on the brakes, head thumping from the freezing headwind that’s has pounded you on the descent. We are all concerned about this for Saturday. What to wear? What rain clothes to bring? What food to bring? It is something that will have an impact in the day unless we get it right.

Today saw us complete 100k’s with 2000 metres of climbing. 2500 to follow tomorrow prior to Fridays rest day. We’ll need it.