It’s the light that makes it’s way through the drawn curtains that sets the tone for a day. The colour gives clues as to what lies ahead and triggers the questions that will make their way through your head for the coming day.

It was dull and the tap tap tap of rain dripping from unmended gutters informed my senses of the wet suit potential for the day. I had made my way down to my uncle’s farm on the edges of the Burren three days previously and was dreading the weather that had been forecast. Here I was, two hours to go and before I had roused from my slumber knew the heavens had opened, not only for the rain but had adorned the An Post Burren event with extremely high winds.

Little did I know, as I made my over the Burren to meet with Kevin, Dave and l’etape comrades John Brennan and Paul Kissane, that Mr McNamees better half had the table set and porridge served for the early risers. The lads had met at Chez McNamee for an early start and were treated like pros prior to travelling to Clare. Does the infamous Sky bus treat it’s occupants as well? 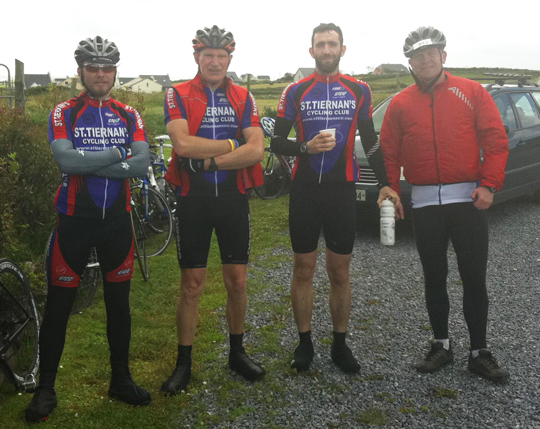 We met at Ballyvaughan and 15 minutes prior to the official start decided to set off. The rain had eased but none of us fancied hanging around to listen too Clare FM’s finest belt out long forgotten Bon Jovi numbers.

Our route took us west towards Kinvara and whereas last year saw a steep ascent of Caran, this year’s course took us beyond that climb travelling inland towards the Burren. The roads were poorly surfaced but there was a touch of romance about these winding back roads. Rutted throughout and lined with overhanging trees that brought visions of Belgian spring classics enhanced by the damp that hung in the air.

We arrived at the first climb “mini” corkscrew hill, (ed – 2nd climb. First climb was Ballaghadine Hill after just 8kms. This climb was only 600m but 10% gradient. Paul and Dave crested first) having travelled down a winding boreen, when Paul Kissane went all Philipe Gilbert on us and danced his way up the 8% 2k climb. We each tested ourselves at this early stage and I must admit to some mild road rage as with 100 metres to go, my heart rate at 95%, Dave “Contador” Comiskey crested by my suffering making glib comments about the great view. All he was missing was the pipe and slippers. He was lucky he didn’t get a clip around the ears!

Having tackled the first of the day’s three major climbs we wound our way to the top of the Burren. The wind was horrendous as it hit you from all directions, particularly when sneaking its way through gaps in dry stone walls and hedges. Gusts kicking at your front wheel testing it’s traction on the poor surfaces beneath. Several kilometres of loose chippings didn’t help either in what was a slightly risky alteration the last year’s route. We crested the stunning mountaintop landscape that is the Burren whilst taking in the fine view of Galway bay below. The rains had held off and our spirits were rising as we shook off the first 50ks and started to find some rhythm. 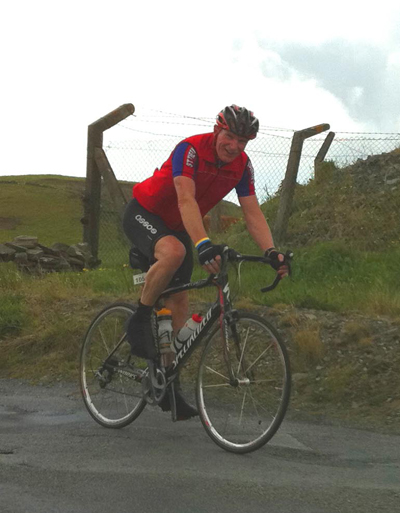 Corkscrew hill was the next challenge and yet again Messrs Kissane and Comiskey took off dancing their way around the 5 hairpin bends dreaming of all things Alpe D’Huez (not-withstanding the 1000 leisure cyclist’s we had caught up with). We came together 2k’s after the summit and proceeded to play chicken with fellow cyclists and some unforgiving traffic that had somehow managed to wind up in middle of all this two wheeled madness.