Eight St.Tiernan’s riders took part in this years edition of the toughest sportive on the spring classics calendar replicating the course of the race the professionals would ride the following day.

A long winter of well thought out training had us all setting out reasonably assured that this year that the road book and not Belgian Rail timetables would be the only reading we would require.

Most of us were it on the early morning flight on Friday and we stayed again at a hotel just by the station in Liege. It was packed with cyclists and their assorted groupies. We were able to get the bikes assembled and head out to the start to pick up our starter packs. Brendan was in on the later flight and on taking the bike from his bag, noted that his rear wheel had been singled out for particular attention by the baggage handlers and was buckled. At one in the morning, he wandered out of his room and walked down the corridor clutching his Gideon’s bible when he bumped into someone from a cycling tour company who was not riding and who kindly offered him his own rear wheel.

Not sure the name of the company but it was a really generous thing for this mystery stranger to do and prevented three months of training and Brendan’s general monk like lifestyle from going to waste.

La Doyenne is a 280 km jaunt through the Belgian countryside and flat it is not. See http://www.sport.be/lblcyclo/2014/eng/parcours/maps/groot.html 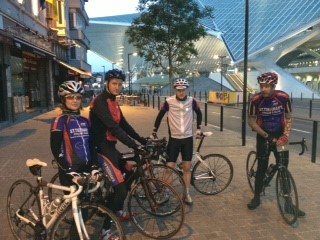 Dave, Barry , Kevin, Brendan, Cormac, Helen and John were up and on the road at dawn and we timed our rides perfectly to come in at dusk. We left the hotel at 0610 and hit the finish line near enough 14 hours and 25 toffee waffles , 10 honey sachets , 1 pack of Tuc crackers and several litres of sugary energy drinks later.

We had ideal weather with it slightly overcast at the start but 8 degrees which warmed up pretty soon as the sun rose and hit 16 or 17 by mid afternoon . More importantly, there was only a slight wind which was predominantly at our backs from when we hit the turn at 110 km at Bastogne.

We were off with the earlier groups and were able to take advantage of a bit of drafting till we got out of the city. After hitting the first of the many un-categorised climbs, we all settled in to our own rhythms and would generally regroup over the top of each hill. This was how we went for most of the day. Helen had fresher legs however and headed off up the road never to be caught. At the various feed stations we would get reports of her progress so we were not too concerned as to her well being which seemed to be considerably better than our own.

This is a really long day and psychologically very hard given the fact that you do numerous tough 2-3 km long climbs and don’t get the pleasure of ticking off a categorized hill from your list of the days chores.